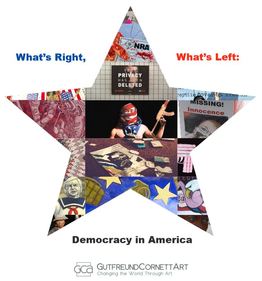 GCA asked artists to share their voices in this art-based conversation about democracy and sought art that addressed and interpreted the following themes broadly:

​In the upcoming election year, what does democracy mean in the United States? It's time for artists to get on their soapboxes – whether it is a conceptual soapbox (Warhol) or direct Statement Art (Jenny Holtzer) and tell us what you think about democracy in America.

What is happening within our borders with the increasing polarization of our political parties and how do our views of democracy affect those outside our borders when we try to spread the American Dream? Have we made progress or are we going backwards? Whether you lean to the right or lean to the left, tell us what you think about the current state of affairs.

How does increasing surveillance affect the tenets of democracy? We have both freedom and a lack of privacy in this digital and Patriot’s Act world as drones and wiretaps are commonplace and virtually unquestioned and unopposed; but do we have a voice in any of this Big Brother culture and with voting restriction laws being passed across the country to silence particular demographics of the American public.

How does the media portray democracy -- truth vs. spin? What is actually news versus entertainment in bombastic, biased editorials? Consider democracy in relation to civil, personal and political rights, economic gain, and the debate over freedom of speech, freedom of choice and freedom to choose to live as you wish.

What did our forefathers intend in the Constitution with the freedom of speech, the right to bear arms, the pursuit of happiness, etc. To whom do these tenets apply in a racially, religious and politically divided country?