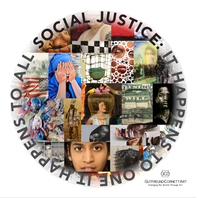 ​Art can inspire change and bring people together, crossing the borders of cultures and languages. Artists challenge the norm, imagine the potential and inspire social change.

For some, the United States is a true manifestation of the “American Dream”, yet, for many individuals both nationally and globally, basic human and civil rights are abridged and jeopardized with a judicial system that has eroded confidence and trust, and with racism propagated through groups that have systemic power to institutionalize prejudice in the forms of laws, policies, and ideologies that exclude and oppress others.

We looked to employ artwork as weapons in the fight for human rights against violence and the ongoing wars. Human rights can no longer be thought of as separate and belonging to a privileged few, but rather that these rights are all interrelated, interdependent and indivisible for all. We believe the artist’s voice will help to foster these important dialogues worldwide and invite artists to add their voice.