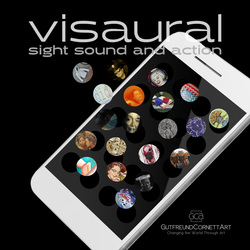 Artists were invited to submit works around themes of social, cultural, economic, human rights, women’s rights, political and social justice activism that combine visual art with music in order to tell a compelling story and, by doing so, affirm the many bonds between sight and sound. Artists were asked to choose a song to which to pair their art – a song that was directly linked to the theme of the work, a song that inspired the work or that was played as part of the artistic process.  Selected works were displayed next to  QR codes, which took viewers to iTunes, YouTube,Vimeo or other link, where the paired music could be heard.

The opening weekend coincided with Honk! Festival of Activist Street Bands.  A 10th Anniversary display was included in the Nave Gallery and gallery visitors were entertained by Dead Music Capital Band from Austin, Texas.