Dr. Kathy Battista
Founder and Director of the MA Contemporary Art program at Sotheby's Institute of Art, New York and Senior Research Fellow of the Centre for Global Futures in Art, Design and Media at the Winchester School of Art University of Southampton.

She is a writer, curator and educator. She is author of New York New Wave: The Legacy of Feminist Art in Emerging practice 2015 and Re-negotiating the Body: Feminist Artists in 1970s London (IB Tauris, 2012), which won the Choice Book Award for 2013. Her essays have appeared in the following edited collections: Drawings in the 21st Century: Papers on Contemporary Practice (Ashgate, 2015); Ladies and Gents: Public Toilets and Gender (Temple University Press, 2009); Arcade: Artists and Placemaking (Black Dog, 2006); Surface Tension: Supplement 1 (errant bodies, 2006) and Surface Tension: Problematics of Site (errant bodies, 2003); as well as many exhibition catalogues.

Kathy has taught at Cornell University; Birkbeck College; The London Consortium (University of London); Kings College; the Ruskin School of Art, Oxford University; and Tate Modern. Kathy was founder of the Interaction education and events program for the UK-based public art agency Artangel. She received a PhD and was a Postdoctoral Fellow of The London Consortium, University of London; a MA from the Courtauld Institute of Art; and a BA from Fordham University. 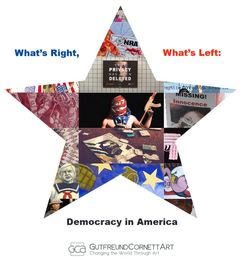 An online version is viewable below or directly on Issuu via http://issuu.com/gutfreundcornettart/docs/democracy_catalog_for_issuu/1
PRESS RELEASE 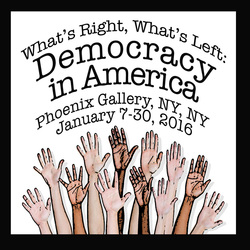 ​GCA asked artists to share their voices in this art-based conversation about democracy and sought art that addressed and interpreted the following themes broadly:
In the upcoming election year, what does democracy mean in the United States? It's time for artists to get on their soapboxes – whether it is a conceptual soapbox (Warhol) or direct Statement Art (Jenny Holtzer) and tell us what you think about democracy in America.
What is happening within our borders with the increasing polarization of our political parties and how do our views of democracy affect those outside our borders when we try to spread the American Dream? Have we made progress or are we going backwards? Whether you lean to the right or lean to the left, tell us what you think about the current state of affairs.
How does increasing surveillance affect the tenets of democracy? We have both freedom and a lack of privacy in this digital and Patriot’s Act world as drones and wiretaps are commonplace and virtually unquestioned and unopposed; but do we have a voice in any of this Big Brother culture and with voting restriction laws being passed across the country to silence particular demographics of the American public.
How does the media portray democracy -- truth vs. spin? What is actually news versus entertainment in bombastic, biased editorials? Consider democracy in relation to civil, personal and political rights, economic gain, and the debate over freedom of speech, freedom of choice and freedom to choose to live as you wish.
What did our forefathers intend in the Constitution with the freedom of speech, the right to bear arms, the pursuit of happiness, etc. To whom do these tenets apply in a racially, religious and politically divided country?
THIS EXHIBITION HIGHLIGHTED THE WORK OF:

​VOTE SMART: Begun in 1986 by a combination of conservatives and liberals,  "this project is an historic undertaking. Citizens come together, not in selfish interest or to support one candidate over another, but to defend democracy. It is an extraordinary gathering of people committed to one purpose: to strengthen the most essential component of democracy -- access to information -- even as it suffers grave attacks from candidates and political parties, many who are now willing to manipulate information and deceive voters." To do this, they have created the Voter's Self-Defense System, where every candidate and elected official from President to local government can be easily and instantly accessed - their voting records, issue positions, interest group ratings, public statements and campaign finances.
Website: votesmart.org
Facebook: Vote Smart

The New York City YOUTH POET LAUREATE (YPL) program is a voting-themed teen competition designed to energize youth voters through spoken word poetry. The program is open to students, ages 16-19. The Youth Poet Laureate for each year and the Youth Poet Ambassadors (finalists in the program) travel the five boroughs, NYC High Schools and parks to speak to their peers about voting and civic engagement.
Website: www.nyccfb.info/public/VRC/youthPoetLaureate.aspx
On Twitter:  @NYCYPL
On Facebook: NYCYouthPoetLaureate
ABOUT OUR VENUE

From its origins as a prestigious artist co-operative in New York, celebrating its 50th Anniversary in 2008, the Phoenix Gallery has evolved into a community-oriented center for all the arts. Founded in 1958, during the "Tenth Street" days, the gallery now has artist-members from around the world, all dedicated to the highest level of professionalism. Each brings his/her own unique style and vision to the diverse group that makes up the Phoenix Gallery. These artists, all carefully chosen for membership by Phoenix artist peers, work in all media and create art that encompasses and reflects wide cultural and ethnic interests.In addition to providing artist-members elegant space to exhibit, the gallery reaches out to the members of the community, scheduling juried competitions, dance programs, poetry readings, book signings, plays and lectures. The Phoenix Gallery is a non-profit 501-(c) (3) organization. The Phoenix Gallery has recently re-located to a Landmark Arts Building, 548 West 28 Street, Suite 528, a half a block from the High Line in the exciting area of Chelsea, New York. The Phoenix Gallery has a full time director who runs the gallery and promotes and develops contacts with private individuals, art consultants and corporations. The director also promotes sales and encourages visibility of artist members. Find out more about gallery membership and other opportunities.

MISSION STATEMENT: In continuous operation since 1958, the Phoenix Gallery represents a committed artist community that runs a non-profit public exhibition space for fellow professional and emerging artists. In addition, it awards fellowships, hosts juried exhibitions, and promotes the work of all its members.
Contact: Linda Handler, Director, phoenix-gallery@phoenix-gallery.com
Website: http://phoenix-gallery.com